A reflection on gender issues across programmes in Liberia, Sierra Leone and Democratic Republic of Congo

The findings of the ReBUILD/RinGs Community Health Worker (CHW) project were shared and discussed at a one-day dissemination meeting in Freetown, Sierra Leone. The research, used a gender lens to try to identify how CHW cadres in Liberia, Sierra Leone and the Democratic Republic of Congo can be better supported to play an effective and long-term role in broader health systems in fragile contexts. During each country’s presentation sensitive issues surrounding gender surfaced and are reflected on here.

Country presentations
The presenter from College of Medicine and Allied Health Sciences in Sierra Leone, Haja Wurie, described how social cultural norms and the potential earning power presented by the new CHW policy meant that men came forward to become CHWs. Women were also influenced by gender norms, e.g. they had to care for their homes, some were shy, while others had to obtain approval from their husbands to become CHWs. Also, men in Sierra Leone are more literate then women, and so reading and writing CHW reports posed challenges for some women. Another issue for some women was the amount of time required by CHW duties and how they balanced this with their other duties.

The Liberian presenter, Gartee E Nallo from the University of Liberia Pacific Institute for Research and Evaluation, emphasised the roles of CHWs in health promotion, health campaigns, and in the treatment of illnesses in children aged under five. As was found in Sierra Leone, most women find it difficult to travel long distances which is expected in the CHW position and are unable ride a motor bike. Community preferences also play a role in who becomes a CHW and women were uncomfortable explaining their health problems to a man.

In the Democratic Republic of Congo, the CHW situation is slightly different to that of Liberia and Sierra Leone. According to Amuda Baba of the Institut Panafricain de Santé Communautaire et Medecine Tropicale, there are more women working as CHWs but they still need to obtain consent from their husbands. When it comes to community development, women are fully engaged. He demonstrated this through images showing women CHWs transforming dirt into bricks to build a new maternity centre.

There are some similarities across the three countries; more men than women are literate and this, as well as gender norms, shapes selection. There are also some inspiring practices here, e.g. in Grand Bassa county in Liberia the community level adult literacy programme has given women the confidence to put themselves forward as CHWs or community health assistants.

Lessons learnt
My learning from the meeting, and from being part of the research in Liberia, is on the importance of gender when researching human resources for health, not just with CHWs but at all levels of the health system.

In terms of methods and approaches, I was really interested in the photovoice approach because the photos provided a really clear overview of CHWs’ own experiences at the community level. We really saw through their eyes. Strategies to encourage both women and men to become CHWs and be supported by the health system are important. 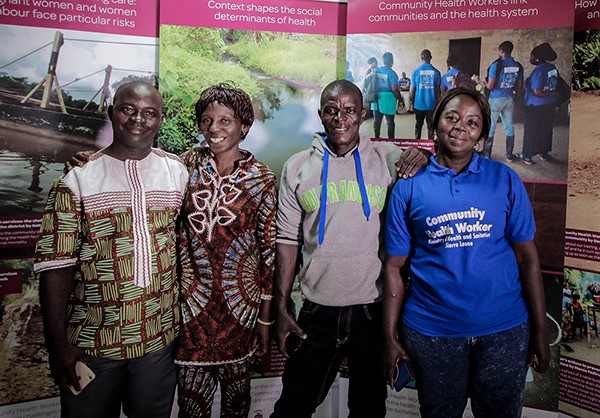 The vulnerability and health research paradox: Ethics, gender, trust and power We are excited to support a range of gender sessions at the Global Symposium on Health Systems Research 2018